PedalPortugal’s website for the Southern Explorer tour says; “In terms of climate, the Alentejo sees
some of the highest summer temperatures in Portugal but spring (late February-early May) is one of the best times for biking in the region.

Some wet days are likely in March but there is a high chance of plenty of sunshine and warm days too. (Statistically, the southern part of the region gets around 200 hours of sunshine and around 55mm of rain in March.)”

In spite of rest days spent drying gloves, shoes, socks, shorts, shirts, panniers and just about anything else susceptible to penetration by rain hitting you from the side we fell in love with Portugal. We came away with a great deal of respect for Huw and Caroline Thomas, who operate the small tour company. Their trip notes were excellent. Their planning and concern for our needs – including a gluten free diet – unrivaled. 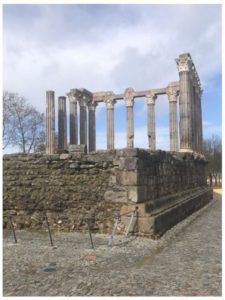 The trip began in the UNESCO World Heritage city, Evora, with
Roman Ruins, a gothic cathedral, and the Chapel of Bones. This misnamed first century Roman “Temple of Diana” sits beside the Cathedral with its 14th century cloisters and panoramic views of the countryside. The chapel was built in the 16th century with the bones of the citizens of Evora as a place to reflect on life. Over the entry is the inscription ““Nós ossos que aqui estamos, pelos vossos esperamos,” or: “We bones, are here, waiting for yours.” We prayed it wasn’t a prophecy for the riding ahead.

Eleven cyclists, if you count the rider on the underpowered
motorcycle (e-bike), departed from Evora, south to Lagos on the shores of Portugal’s Algarve. We rode through changing landscape – cork trees, small mixed farms, fields of sheep, blossoming almond trees, olive, and orange orchards. We rode through villages that have seen Phoenician sailors, Roman soldiers, Moors, Christian crusaders, cell phones and computers. We rode over the Algueva Dam and followed the Guadina River. We climbed 1000 meters in the course of one days ride, and descended 400 meters in minutes into the Algarve.

Along the way we stopped in a Hotel that had been in operation as a hotel since 1898; and, before that was a convent. We had a rest day in a city on a hill. Mind you, in Portugal, almost every city is on a hill.

The bad news is that each days ride ends with a 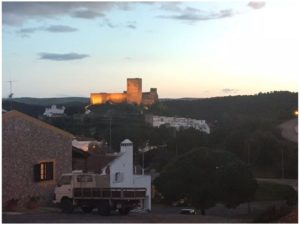 climb. But this city, Mertola, is at the confluence of two rivers. It is inland but still affected by the tide. The remains of the Roman port from the fourth and fifth centuries are still there. Above, perched on the city walls, the medieval castle of the Order of Santiago is next to the church. It incorporates Islamic features created by the Moors whose mosque stood in the same spot.
Only a few meters away Roman mosaics and baptismal fonts are protected from the elements by steel structures. Not to mention those who might want a souvenir. One can imagine the Phoenician merchants in the river below long before any of this was built.

Another next night found us in a remote “guest house and spa” 5 kilometers from the main road up
steep short climbs at the end of a mile long gravel driveway with an incredible view of the Alentejo
forest. It was deceiving. The windmills in the distance, which we rode by the following day, were at the
end of a seventeen kilometer ascent (a gentle climb they called it). At the guest house they appeared to be below us. It was from those turbines we descended into the Algarve.

While not billed as such, it was a 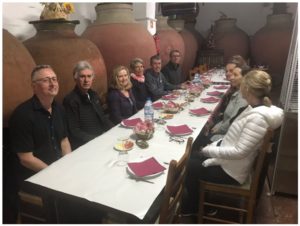 culinary tour as well. Huw and
Caroline arranged for meals every
night that included wine or beer
giving us a taste of the different
regions and recipes of the
Alentejo. Lunches were picnics in
town squares, and on a couple of
days courtesy of the cafes which
allowed us to bring our own food. Coffee to die for. Not Timmies Large or Extra Large but Café
Americano, or as it’s called in Portugal “abatanado” (essentially a large expresso), at regular stops
along the way. Breakfast was included every morning – freshly baked bread, cheese, meat, cereal, and the occasional English Breakfast.

The Alentejo is one of the least inhabited areas of Portugal. Rural, quiet roads, wind through the hills
and villages. Coming into the Algarve with it’s tourist population after 10 days, and some 500 kilometers of cycling, came with a bit of culture shock. But the beaches are sandy, and the sun was out. The ride finished with a dip of our toes in the cold waters of the Atlantic, and a seafood feast that couldn’t be beaten.

This site uses Akismet to reduce spam. Learn how your comment data is processed.